From the RV Desk of Miss. Melanie Chambers 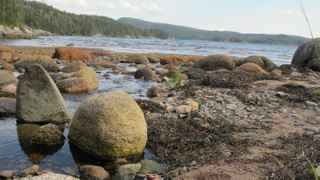 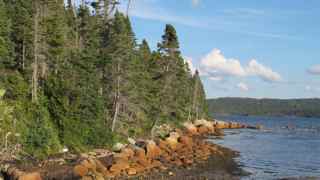 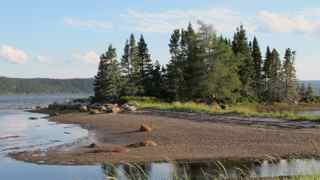 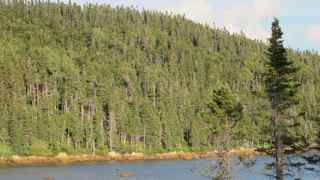 Scenes from the end of my hike starting at the Visitor Centre, but more of that later. This is just a visual teaser.

Can you imagine taking your whole house and parking it outside the trail head? Oh, you forgot your allen keys? Um, let me just grab em’ in the RV. Hmm, need a snack? Just going to fire up my gas stove and make a steak; okay, steak for a snack is silly, but you get my point. It’s whacked, but that is how travelling in an RV feels.

I drove the RV down the park road from my site, about 20 kms, and parked it just past the turn off to Dunphy’s Pond, a 10 km there and back trail. Of the 13 hiking trails in the park, ranging from a mini 3 km loop to a 32 km route called The Outport (camping overnight), there are only three designated bike trails. 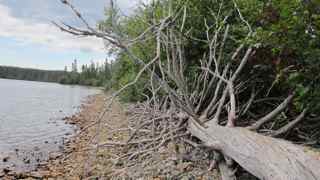 Dunphy’s is the largest pond in the park (we call em’ lakes in Ontario!) and there are 134 of these said, ponds, in the park. Riding the dirt road to the pond is a gradual climb near bogs, such as below. Watch out for the drain pipes that cross the road! Yowsahs. If you grab the front breaks too tight, you’ll fly bum over tea kettle, as mudder would say. 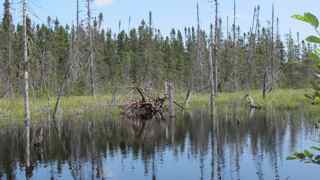 I had to do it. I didn’t feel good about it after, but it was sooo gratifying at the time. I ate a baloney sandwich. Mom always called baloney Newfie Steak. At some point in my life, I started caring about what I ate, which means the dear old baloney and mustard sandwich, on white bread, has been stashed in my childhood memories. The gut pains afterwards will ensure it gets stashed back into the memory vault. 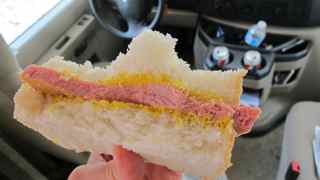 After lunch, I headed down to Charlottetown, a little seaside town, which isn’t part of the park. Baked goods at any of the mom and pop stores are a must. I bought a pack of squares; you know, the kind that Nan makes for church fund raisers: Nanaimo, mini carrot cake with cream cheese icing… drool.

“Your Ontario flower the trillium is all pretty, but ours is a meat eater!” says a Newfie friend. Flies land in the base of the tubular shaped pitcher plant and drown in the water at its base. The plant just sucks up all its nutrients. Genius. Didn’t see one on the trail, however.

Dozens of exotic mushrooms, berries, perfumey flowers, and rare flowers were everywhere. I felt like Darwin snapping four by four glosses (my nannie’s name for pictures). 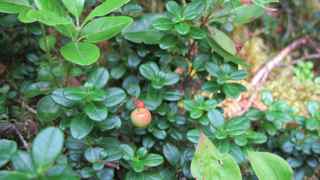 The trail head starts at the Visitor Centre. I began with a loop of Blue Hill Pond that leads into Buckley Cove–about three hours of easy walking.

The famous Newfie partridgeberry is internationally known as the lingonberry. It isn’t ripe above, but come late August it turns a nice dark wine colour and tastes like a type of cranberry.

The first part of the trail is a giant boardwalk through bogs. 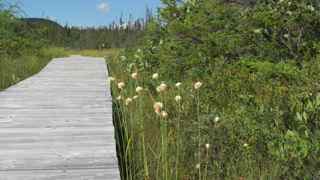 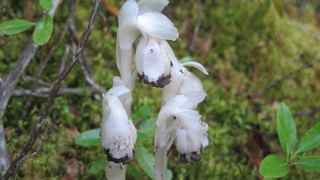 This little guy isn’t a mushroom. Looks like one, doesn’t it? The corpse plant, or Indian Pipe, doesn’t contain chlorophyll so the parasitic little dude feeds off trees. 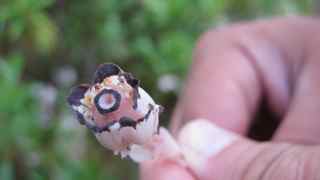 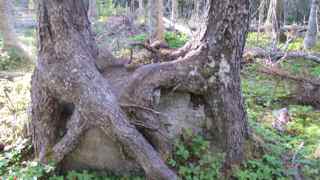 At the end of the trail I came across these two trees having their way with this rock; okay, Charles Darwin wouldn’t say it quite like this, but maybe a Newfie would? So there.