At the start of my second mountain bike race, I was feeling a different kind of nervous compared to the first race: the first race was fear of the unknown, fear of falling off my bike and never finishing, and fear of competing for the first time. After riding for more than 15 years, my ability wasn’t something I had to prove to anyone. Now, here I was putting it out to be measured against others. And, after coming in second in my first race two weeks ago, there was the added pressure to perform. I realize it’s not the Olympics or anything, but it still means something to me. 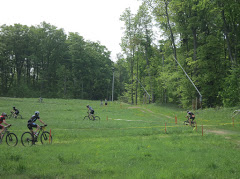 The fear this time around was riding a technically scarier course; on the last race I could get away with a fast and smooth race, but Kelso Ski hill had some sections that made my heart sink–like the pile of rocks that drops at the end. From above it’s hard to see the step below and what you can’t see is petrifying. Trust.

On a pre-ride a few days earlier, I already had a few spills: after hitting some loose gravel on a sharp fire road turn my handlebars turned 180 and spit me off the bike.

But, waiting at the starting corral, categories of 40 and then 50 plus mixed women, it was a relief when someone broke the silence: “I get so anxious ever single time. Why do I do this to myself?” She answers her own question: “because it feels so good.” Second later she pipes up, “God, and my nerves. I had like five poops this morning. What is that about?” I join in: “so did I!”

It helps lighten the mood. One of the ladies beside me realizes she has the wrong age category number, to which we all discuss age tropes: “after 45 everything just becomes harder,” says one lady. I don’t agree. Sure, recovery time is longer, but I’m pretty sure my 42-year-old ass could kick my 20-something ass!

I’m riding in the sport category, which is entry-level in the Ontario Cup race series. If I earn enough points, I might qualify for an early upgrade to expert. And this time, because I made podium last race, the announcer called me up to the front, next to my competitor. See? More pressure.

Here it comes: the dreaded 10 second countdown. Legs begin to move but my head is back in bed. Come together, Chambers. It’s begun. Onto the gravel road we ride a stupid loop; stupid because it’s delaying the inevitable climb: a switchback that snakes up the mountain. On the ascent, my seat is poking at my bum, and my elbows are nicely tucked in. Reminders from sweet coach P. His words come in and out of my head throughout the race. Mouth agape, like waiting for someone to throw me a grape, I can’t get enough oxygen. Legs are concrete. The trail turns into the forest on single track, and the climb continues. More.

A sharp left turn going over a ragged tree root requires all my attention. Hit it on the wrong angle and you’re off the bike. “Look ahead farther, Mel.” It’s P’s voice again. Little nuggets of advice. Spirit lifters.

Speed picks up. “Pedal like hell,” another mantra, this time from my 70-year-old friend in Nova Scotia. On the wide fire road I drop my chain into the big ring and hammer it. Reaching for the bottle, I squirt a shot into my mouth and without looking, put it back, fast. Single track coming up–impossible to ride with one hand.

In between the trees I see my competition. But, I don’t believe I could catch up.  Heavy legs and clunky rhythm, even my body doesn’t feel positioned exactly right on the bike. This is the result of a short warm up, I think. Then, I see relief: one kilometre to the end of the first lap. Already? Half an hour, or 8 kilometres remaining. Dropping into a bowl and then sliding onto a bank, I hear P say something encouraging. I can’t recall exactly what, but it made me smile.

Back to the beginning. One more time. I can do this. 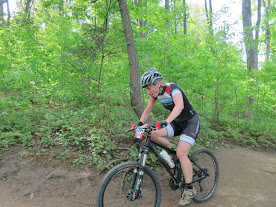 I’m neck-and-neck with a woman I rode beside at the beginning. “What age group are you in?” I ask. “Fifty.” “Oh, I’m in the 40.” She laughs: “Thank God, you’re good on the hills.” And with that, I slide ahead. But this time it’s a lot harder. P is there: “you’re 30 seconds behind first place.” But, looking over onto the grass, I’m weary, and think, wouldn’t it be nice to sit down right now.

Back into the forest, something kicks in. My breathing meets my pedal strokes; my thighs lighten up ever so slightly and my front tire finds the right lines around corners. I’m in the zone.

I’m not just getting by or surviving this race. I’m moving to compete now.

Minutes later, I see her through the woods. Second place isn’t so bad, I think. I’m ok with this. But, as the distance between us shortens, and I can see her meters in front, my thinking changes. I can beat her. I want to beat her.

Dropping into a gully, my tire barely skims a clump of rocks. The bike jumps onto the rock escarpment but a few seconds on top of the rock and I hear: “pstttttt.”

A loud, seeping flat tire, like a big fat balloon deflating. My heart sinks. It takes seconds to collapse. I keep pedalling, but the clunky tire on the rim is popping all over the trail. Can I keep going like this? A sign says one kilometre. Of course I can. Ride and run. I’ll finish. Another rider passes by: “Can I ride on a flat?” “You bet.” And with that, I keep going. I will do this even if I have to put my foot down to steady myself.

Coming down the grassy trail on the mountain, the end is near. Coming across the finish line, I’m relieved. I’m done and search for P in the crowd. One of my Lapdog team members comes up to me: “nicely done, Melanie.” Wow, thanks.

I find P and we hug. That helps, tremendously. “It’s all part of the journey,” he says. And with that I make my down the hill waving to new friends. I come in fifth out of 6 racers in my category. No matter, I finished. And what’s more, I was already thinking about the next race.