“I didn’t know to be scared,” says a precocious woman who just successfully hopped over a huge log. “Ignorance is bliss, I guess.” I’m mountain biking with a group of women, many like Sonya here, who are new to the sport. And she’s got it right: knowing what’s coming around the corner can oftentimes psyche you out. I know this feeling well. 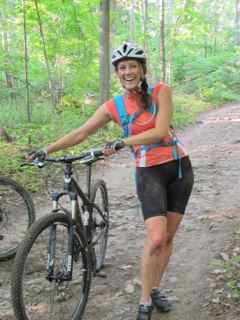 Still in one piece and smiling. Badass girl!

The team lead, Karen Duff, co-owner of www.fit4adventure.ca, is my new bike buddy, whom I first met on this ski hill during my second race. Cresting the top of the switchback climb  for the second time around, I gradually pass Karen. “Are you in my age category?”she asks.

“Thank God,” she says, as I creep past her. “You’re a monster on the hills.” Those words gave me enough courage to suck up the pain — that and P on the sidelines encouraging me. See, isn’t it amazing when people believe in you? 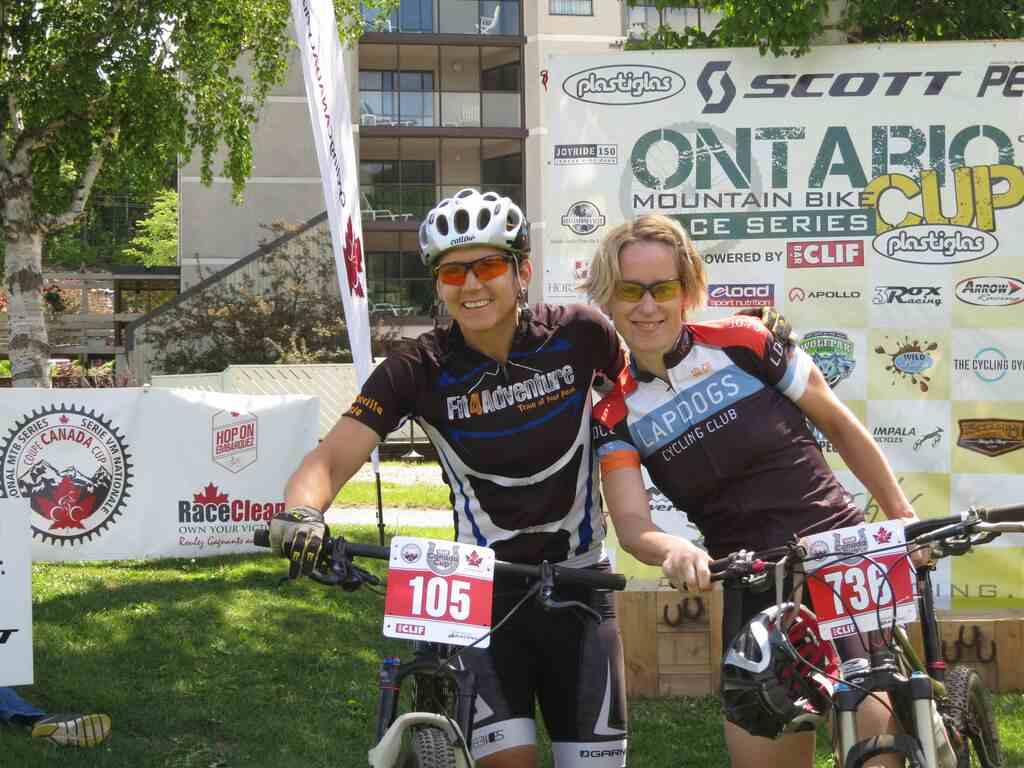 After the race, we shake hands, exchange emails and become friends. Building relationships was a huge impetus of TJP (The July Project). What does it feels like to seek out people who share things I love and value and build on something?

I haven’t had many girlfriends who ride. My best friend just bought a bike for the first time since she was a kid. I don’t think I have ever been without one; now I have three. The skinny road bike is the latest, along with the mountain bike and commuter bike for the city.

When I came to Toronto, and before I began racing in the Ontario Cup races, I really had no idea how many mountain bike trails were in the area–and the hills. It’s no BC, but it’s also no pancake province! Kelso Conversation Area backs onto part of the Niagara Escarpment, a UNESCO heritage trail spanning over 800 kilometres from Queenston in Niagara to Tobermory. In fact, the expansive whaleback size rocks and bubbly chunks of rock gardens, called baby heads, are classic escarpment terrain and oh-so-fun to ride. Some good technical practice.

I meet Karen to ride for a few hours before meeting up with the rest of the women’s group ride–just some one-on-one practice. Drop offs–the very phrase makes me shiver so we practice zooming over a wooden plank. I always assumed that it required immense skill — something I could never quite get. But, riding with P, and now Karen, I’m learning that it’s 100% confidence, speed and a little finesse. But, here’s the kicker: riding a drop off is more about swallowing your fear than skill. Here’s a wee drop off video. WEEEEE

The ride is certainly slower that riding with P: we stop to chat a lot, and more often than not, the conversation isn’t about riding. 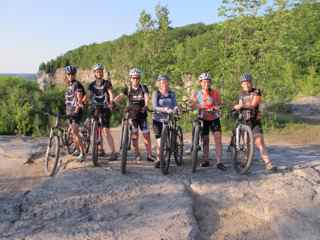 Riding under the canopy of the trees, the shadows are getting longer as the sun sets. It’s almost 8PM by the time we return to the parking lot; exchanging contacts and congratulating one another on our ride, my Toronto connections are just getting wider and more profound. I am caring about this place thanks to these people.

Driving home along the 401, coated in dirt and starving, I think of my memories at Kelso: getting a flat during my second bike race, it’s been my nemesis; coming here for months with P, running into the lake after rides, it’s been a place where I fell for a pretty cool guy; and finally, on my drive home, I think about how lucky I am to have this in my backyard. Just a 30 minute drive down Canada’s busiest highways and I’m in the woods and on my bike.