“And that Wall of Death climb was ….whef. It goes up, and then just as you round the corner, it keeps going.”  A fellow rider is referring to one of the many climbs at Albion Hills.

“I just renamed it!” Death, pain. Take your pick, this race was a doozie.

And, today, Albion is the site of the fifth (of seven races in the Ontario Cup Mountain Bike race series). (Albion Hills Conservation Area is about an hour drive up highway 427 north then highway 50 past Bolton: http://www.trca.on.ca/enjoy/locations/albion-hills.dot#sthash.0t1Q3l8V.dpbs)

Besides the climbs, humidity was the other demon. The temperature said 27 Celsius, but the thick sticky air felt like riding with a lead vest. After finishing, I overheard one rider: “I had to stop, I was getting cold sweats.” And, it was my first time seeing a rider puke. Yippee to new experiences!

But these challenges are part of the fun. As I make my way through this racing/competing maze, a first time racer, I did so to connect with riders, but also to understand what it means to race, verses ride.  On a ride, I can coast when I need rest; on a race, I need to persevere. Push. Embrace the pain, Chambers!

Today is also unique from the other races: my boyfriend is also competing.  A former Ontario Provincials Champ, I’m nervous, and excited for him. I’ve learned so much from this guy, and now that’s he’s back riding after a hiatus; I can’t wait to see what he can do. He’s a born athlete. And now, after months of him helping me, I hope to return the favour. But really, we’re a team.

Packing lunches the night before, arranging the car, cleaning the bikes, planning and talking out our race strategy–it feels like I’m part of a really cool club and there are only two members. 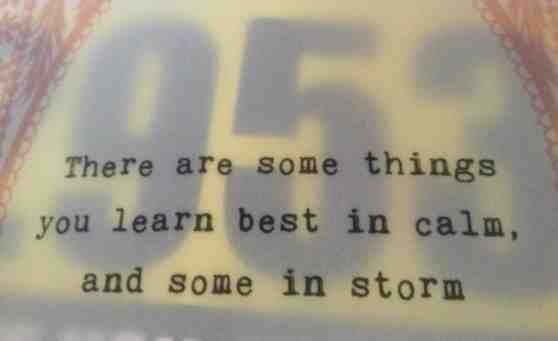 On to the race!

The night before, all the race details are running through my mind. Sleeping is impossible. On the drive to the race, P asks: “you seem more nervous than normal, why?”

“Because I know I can do well on this race.”

On the preride on Friday (race on Sunday), I zoomed up the Green Monster beating out some long standing riders on Strava (a bike app that compares ride times and distances). The first place rider rode it in 1:07. Me: 1:22. I’ll write more about Strava later, suffice to say, hills are my forte.

I did a half hour warm up with another rider from my Lapdogs team at Duke’s Cycle shop a couple blocks down Queen Street from my place. It was nice to chat about life to take my mind off the race, but in hindsight, it’s best to stay in the zone. You should be thinking about the race;  visualizing the turns and tough corners. But I wanted something to calm me down, and having someone around did the trick.

In the starting corral, my mind was fixated on the upcoming suffering: the Green Monster, the other huge climb, the Wall of Pain, the heat, the 22 kilometre course– the longest so far in this race series– and my competitors. 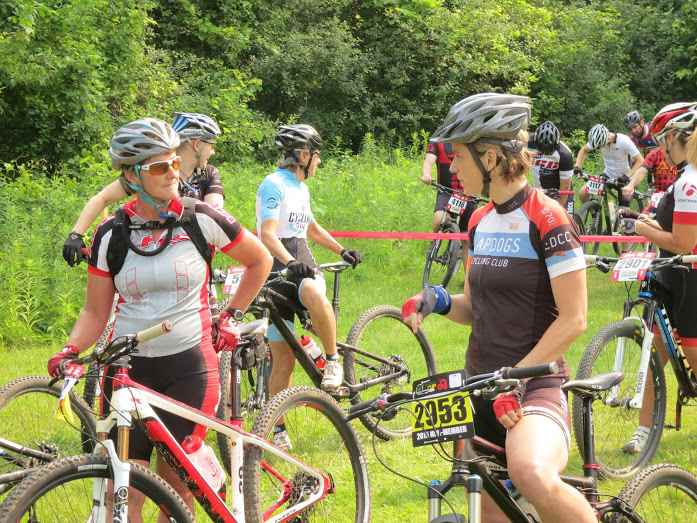 Talking to Barb Armstrong who leads women’s  riding clinics for the Durham Forest Mountain Bike Association; she’s one of the regulars I talk to during the races.

I get no call up to the start line this time–I registered for the race that morning (something I will never do again!) Then, the inevitable: pushing off with the pack. I’m near the end, but creeping up a small incline on the left side. Legs feel a bit heavy and I wonder if maybe I shouldn’t have pushed it so hard on the climbs two days ago…

Ducking into the first part of the single track, after passing one or two riders, I am riding behind two other women, both blondes, for almost 20 minutes or more. That’s the thing: passing is really hard on single track. But, eventually I slide around the first woman. Stumbling and swerving a bit in front of me, I can tell the other blond is tired. “It’s tricky, eh?” I say to her.  Eventually, the trail opens up and I pass her. “Good luck,” she calls out. Some riders are so in the zone that you can’t speak to them on the trail. I guess I could use more of this.

Now, I’m alone. Actually, for the next one third of the trail, I’m riding by myself. But, when I come around that corner, a group of spectators start yelling to get me up the Wall of Pain: “you can do this! Give it!” As I begin the accent, one man’s advice is particularly helpful: “pick a line, there you go. Look straight ahead.” These are all tips P has given me in the past few months.

At the crest of the hill, unable to catch my breath, I start to speak to myself: “move your legs, change gears, just move.”

Back onto the single track, this trail is full of sweepy tight track: don’t brake, I remind myself because just ahead there is safe flat section of trail. Instinctively I want to grab my levers to slow down: hands off, hands off. Go with the flow, there is nothing in front that will hurt you.

Coming out to a road again, reaching for the bottle, I sip and and tuck the bottle back into the cage, but not enough; looking down minutes later, the bottle is gone. Shit; it’s the hottest day of the year and no water. I realize at some point there is a feed zone (where your team members will give you more), but I don’t know where I am on the trail. But, it’s not minutes later when I see Paul ahead. “Go get them! I think you’re in third place.” I lost my water bottle I scream from the bottom of a hill. I see him rushing to his backpack–‘this is illegal’ he says. I don’t care. Sue me. Charge me. Give me that water!

Eventually, I hear someone changing gears at my back wheel. Back off I think. I assume it’s one of the blonds: turns out it’s a grey haired dude in his 60s. “Wow, you’re fast,” I tell him. “Not so bad yourself,” he says. He passes. Alone again. But the news of third place makes me go a little faster, suffer a little more. The race continues and the end does arrive. Turns out I’m in fifth; yes, there are more contenders at this race than the past, but I feel a bit miffed at myself.

Seeing P, it’s amazing to get that post-ride kiss. Makes it all worth it. Talking with the other ladies–comparing horror stories of the heat, the hills–P reminds me that at times when I was coasting along, my competitors were gum booting it. “You’re still learning how to race.” True. “You’re not even aware of what you can do yet.” And that knowledge, that hope to see it burst open, is what keeps me going.