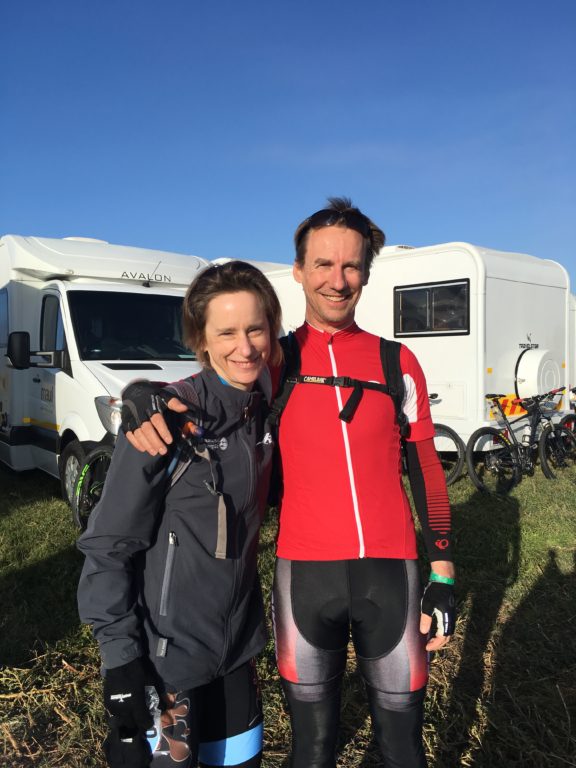 It’s hard to write when all you want to do is lay down — anywhere – and sleep.

Paul and I, with 800 other riders, mountain biked about 116 kms through track cut through farmers’ fields, with the South African sun beating down on us. When I came through the finish gates with young kids cheering for us, my bike computer read: 3,000 calories burned. It’s the first of nine days. Eight more to go, but I cannot even think of that now.

Here is us, fresh faced and ready before the race.

Looking back it seems so long ago. Did that really happen? Did we really see a pack of beautiful horses run alongside us? Or ride a rubber dingy across a swamp that didn’t exist a few weeks ago? Eating boerewors sausage (Afrikaner beef and pork sausage), while a woman sprayed sun block on us? And I will never forget the shadow of the clouds on the arid golden mountain. 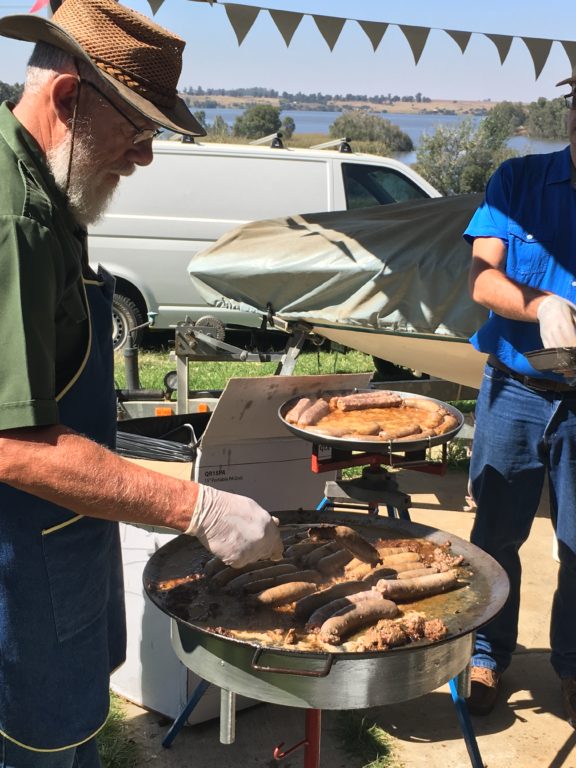 And… a South African treat. Adorable kids with wooden boxes were offering Cook Sisters. It’s a dense doughnut soaked in sugar and it’s wickedly sweet. I could feel my heart rate increase after the first bite. Oh so good.

It was called a neutral day, but I have to say, a few factors were against us: jet lag (arriving three days ago) and elevation (Joberg is about 1,753 meters- Toronto is mostly sea level). On the drive to the start line, our South African friend, a surgeon by trade, who is normally so calm, yelled out, ‘fuck!’  He’s understandably nervous. This is his third attempt at the race. Once he broke his wrist just before the start and another time, he dislocated his shoulder with only two kilometers to the finish!

Paul here: As someone who’s been racing mountain bikes for over 10 years, sometimes at a relatively high level (for a masters’ athlete, at least), I approached today’s fairly flat stage as a bit of a lollygag. Especially considering the fact that today, as the first day of nine, was a “neutral” stage, meaning every finisher is given the same time. Yikes, was I wrong! My word for today is “humbled”. I’ve never ridden over 100km on a mountain bike and that was way tougher than I expected. My legs, from butt to toes are crampy, my knees ache, I can barely turn my head due to neck pain, my back is so stiff I needed Mel’s help to get up from a sitting position and my butt, ugh, I don’t even want to think about that. 8 more stages to go, including the so-called hard days 5 and 6. Yep, this is gonna be some kind of adventure. Not sure exactly what kind yet…

Well, we are heading into dinner soon – this is me at the second rest stop. I’m coated in a film of red soil. I also probably ate a pound of dirt on the trail, too! And yes, I still love all of it.