Karate chop a snake in The Bergs 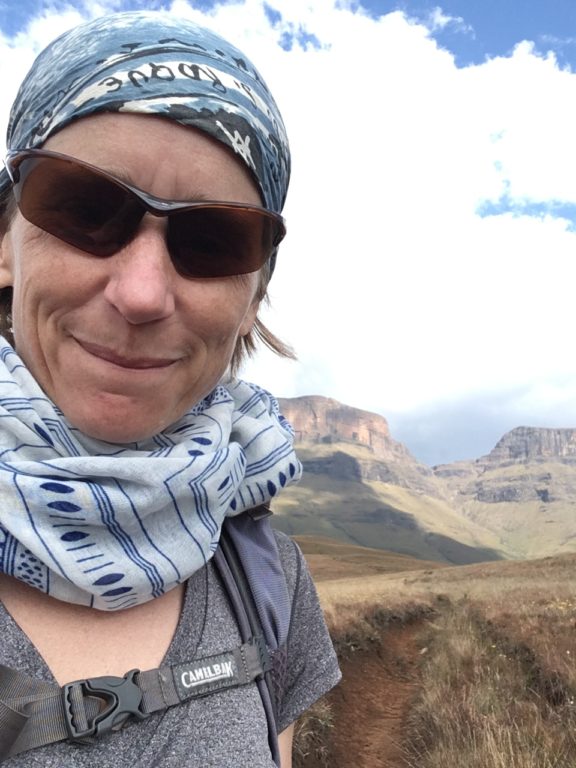 07 May Karate chop a snake in The Bergs

I wish I had my heart rate monitor this morning when I heard a snake hissing in the grass. Hmm, let’s see, was it the highly poisonous rinkhal whose neck spreads like a cobra and attacks the nervous system? Or, could it be the Puffadder? I think it was the Puffadder. They like hissing when humans approach. “The bite is very painful followed by massive swelling, nausea, shock and a drop in blood pressure,” says the hiking map. I think I prefer the rinkhal. None of this dramatic, (think of the cowboy that just got shot in the Western movies). Unnecessarily long process, non? Draaa….maaaa. If you’re going to kill me, get it over with.

Lucky me, I scampered past the sound and kept going. And don’t give me the speech about hiking alone. What, is my partner going to wrestle the snake for me? A couple kung fu chops to the lizard skin? Nope. My big concern with hiking alone is snapping an ankle and then the vultures start to pick at my body. Thankfully, ankles are intact, today.

Jokes aside, this place is stunning. I’m staying at Giants Castle (cabins) in the Ukhahlamba Drakensberg Mountains. Afrikaans named it, Mountains of the Dragons, because the top of the mountains resemble a dragon’s back. Layers of red, yellow and black stone topped off with green shrubbery , and red rock plateaus, I followed the ridge along the river today. 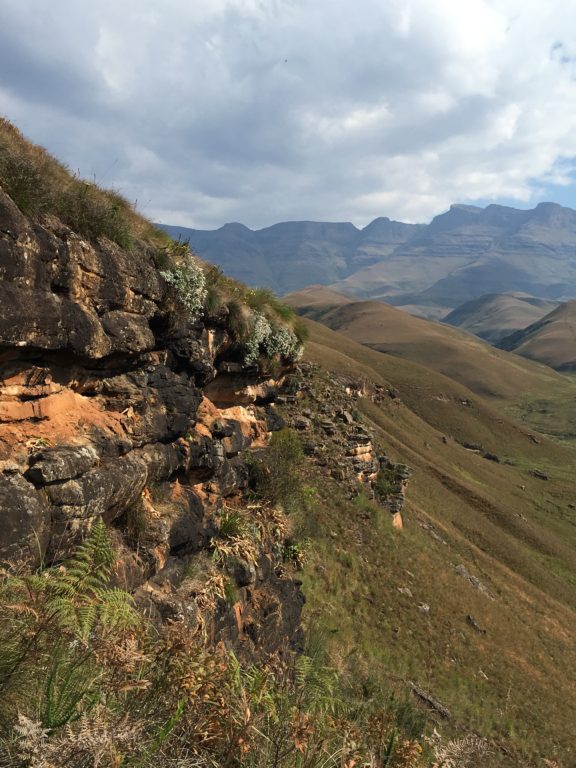 In 1997 Sir Edmund Hillary (first man to climb Everest) stayed in the ‘Bergs.’ He was 70 at the time so not up for hiking, but he was helping the Ezemvelo KZN Wildlife (park management) promote the park, which  subsequently received a UNESCO designation in 2000.

What also makes these mountains so amazing is the 30,000 San Bushman cave paintings, the largest collection in the world, in the neighbourhood of 8,000 years old. I saw some yesterday – they’re about a 20 minute walk from the cabins and they’re actually quite cute: people dancing, and a woman giving another woman a baby. Of course you have all the hunting and animals, but dancing? Lovely.

After mountain biking intensely for nine days, constantly being on, focused and occupied with the riding, it’s so nice to hike and let all that go. Hiking is in the details. Like today, following the sound of the river in the valley below, and then turning a corner to have it disappear and replaced with a gentle wind in my ear. Or, watching the way the shadows of the clouds move across the mountains, like zebra stripes; or, stopping to examine a blue and red bug, cricket? 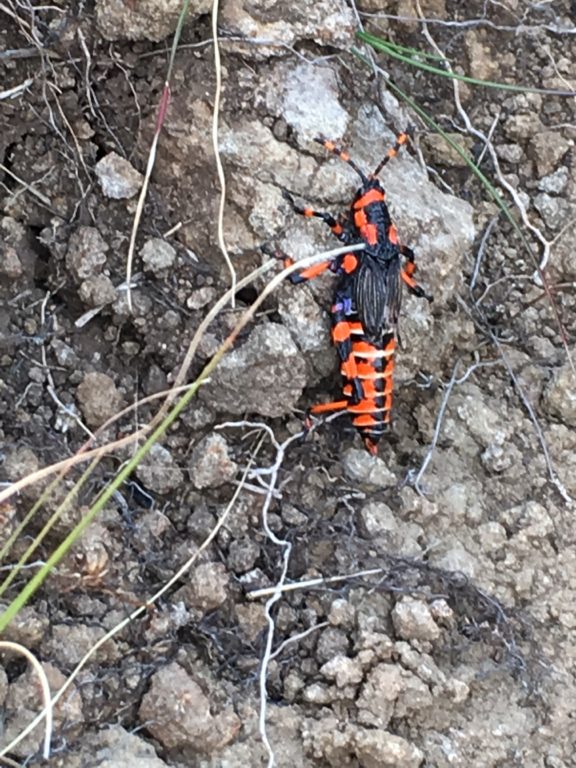 Or, happen across a couple from Pretoria, South Africa and stop to chat. And before I could get their names, a 50 something couple camping in the park, they invited me to stay with them. Wow. As it was the weekend, lots of city folk come here to hike and camp for the weekend.

Walking on, it wasn’t long before the ridge walk lead to the top of the plateau and I was following a red path through the golden straw. The path undulated up to the rocks, when I saw something moving. A baboon. No, two, three, yikes, over 10! They didn’t really care that I was there, but it made me nervous. At the cabins we’re warned to keep doors closed because they get in and search for food and are known to bite. I wasn’t taking my chances. I turned back. I’m sure I would have been fine, but I was also getting pretty knackered. Even though it’s winter here, the sun is strong.

Ok, back on the restaurant patio: a bowl of ice cream with chocolate sauce and a beer. Back to reading Good Morning Mr. Mandela. Written by his Afrikaan secretary, it’s a good primer for South African history. Looking into these mountains, it’s inconceivable that apartheid, something so vicious and hurtful, could happen in this country, but no politics here, just beauty.