“You looked shell shocked at the start line,” says my bike buddy. Yes, waiting with one leg on the pedal, arms on bars, and poised to push off, all I could think: “what am I doing here?” And while the women around me in my 40-something age category tried to reassure me they felt the same way, I was stunned. 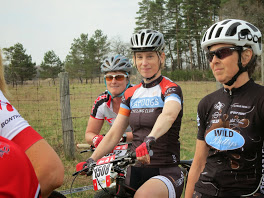 Ten second countdown. Heart is pounding outside my chest. Nine. Wow, that woman’s legs look strong. Eight. Apparently, other people think you can do this. Seven. I’m 42. Six. Can I puke now? Five. Four. Three. Two. Off we go. I’m last. 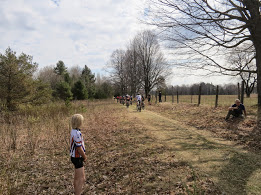 If I’m going to do it, now or never: once we get into the forest, it’ll be worse. “On your left.” Aha, the bike didn’t fall over. She didn’t yell at me. I pass a few more. It gets a bit easier each time. By the time we take a left turn onto the single track, I’m mid pack.

It’s 10 am and I’m guessing it’s 20 degrees already. Dust flies up from the trail coating my sticky arms and  legs a desert ochre colour. Already my mouth is as dry as cat litter. Is it the climbing or the thought of falling, but I’m shaking. “Calm down. Calm down,” I tell myself.

The trail widens again. I pass. It’s hard to tell who I’m racing against: there are women from other categories mixed in, and honestly, from the back, some of these 50 year olds are tighter than the 20 year olds.

“You look really good from behind,” I tell a woman. “Haha..thanks.” So much for trash-talking my competition.

But not all are so kind. Passing a determined woman, I slide in front. I’m not there for a minute when she says: “well, you’re in front now so what are you going to do?” When the single track dumped us onto a road again, I stick it into the big ring and climb out of the saddle.

That felt really good. Until the second big hill. Drop the gear, elbows in, light arms, butt on the edge of the seat, ‘like it’s in your butt hole,” I could hear my friend reminding me. “Big circles on the pedal.” At the crest of the hill, “don’t stop–a few strong strokes and you’ll leave them in the dust.”

Turning back, I can’t see the trash talker. After the hill, I know it’s flat and it’s also the end of the first lap. “Look ahead and hammer it, Mel. And, lay off the breaks.” Coming up to a turn on a bank, a few spectators clap and I can hear Katy Perry blaring from a radio: “baby you’re a part of me!!!” The music is surprisingly comforting and encouraging. Then, I see my bud. “You can make podium!” What? Get out of town. 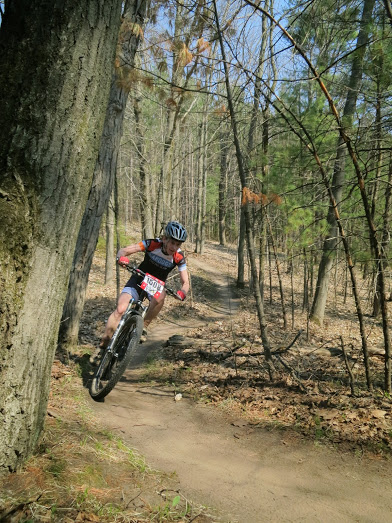 One more lap. I can do this. I can really do this.

I’m faster on the second lap. With his words, I start to suffer a little more–push a little more–want a bit more. Squirting a few shots of water into my mouth, careful to not lose balance holding the bike with one hand and the bottle in the other, I think: less than half an hour, and I can drink all the water I want, but not now. Move. Stroke, stroke, stroke and then the bike flies around a corner, my front tire almost going over the trail into a tree. I recover; my heart goes back into my chest. Go. Move. Just keep moving.

It’s the last hill. The same crest. “Hammer it, Mel, you’re almost done!” I skirt around a rock garden–not ready for this yet– and see the sign: FINISH. And in a flash, it’s over. Moments later: “you came in second!” I can’t remember the last time I felt this good. Dancing on the spot. “You’re giddy. I didn’t want to tell you before because I was afraid it would psyche you out, but I knew you’d make podium.” Wow, and after this feeling, this rush, I’m starting to believe it, too. 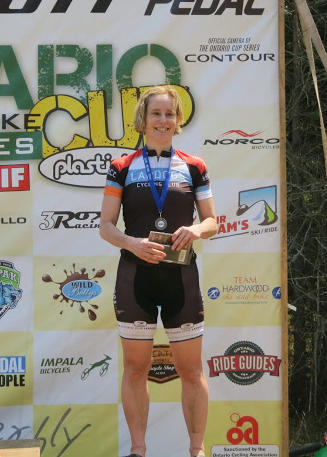 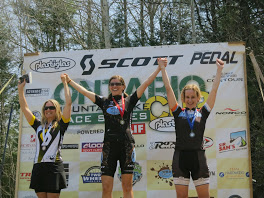